Global economic risk, as measured by the IHS Global Risk Service short-term risk index, has been rising since late 2014 and now sits at elevated levels compared to its pre-Great Recession readings.

This is indicative of increased investment risk in light of economic and political uncertainties.

Given the current environment, it is unlikely there will be a substantial decline in the index in the near term, say analysts.

On the economic front, central banks have managed to contain the risk of another worldwide recession and financial crisis during the past seven years, but have done so by employing unorthodox policies. Also, the effectiveness of their policy measures seems to have greatly diminished.

Meanwhile, global GDP growth has decelerated to dangerously low levels owing to structural and institutional problems that have eroded productivity growth and depressed business profits and investment, according to the report.

Tech Stocks Trending Down After Trump Election
The tech industry was one of the sectors that was most clearly outspoken against Donald Trump during the long campaign, with many companies openly endorsing his Democratic opponent Hillary Clinton. Trump’s protectionist tendencies and plans of revisiting long-standing trade agreements could significantly hurt companies such as Apple who largely rely on Asian suppliers and manufacturing partners. 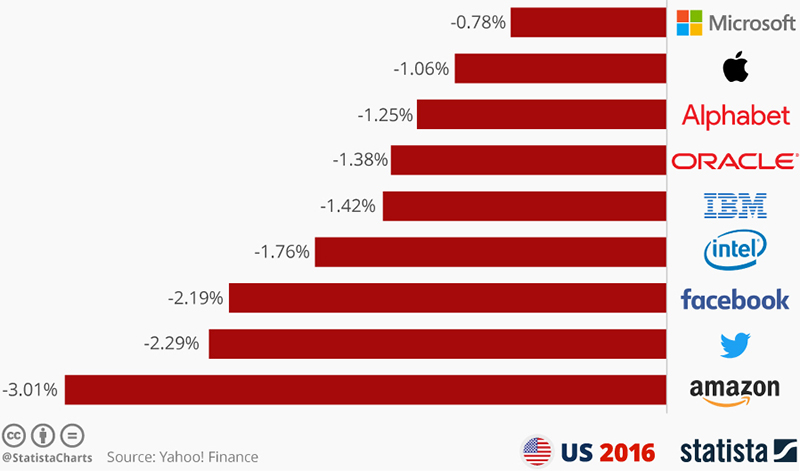 When the stock market opened several hours after the result was officially called on Wednesday morning, the initial market reaction to Trump’s unexpected win wasn’t as severe as many had expected.

Read: Tim Cook Says Apple Is “Open to All” in Note About Trump Win

While most major tech stocks had fallen below yesterday’s closing prices when the market officially opened, the crash that many had feared in case of a Trump victory failed to materialize: Compare Technology Stock Prices

ITIF Report: President-Elect Trump’s Positions on Technology and Innovation Policy
This report provides an overview of the general philosophy that the president-elect has articulated on technology, innovation, and trade policy, and then examines his policy positions across eight specific issue areas. Read Report

Political Front
Although risks are still low by historical standards, they have risen considerably on the political front in many developing countries such as the Democratic Republic of the Congo, Brazil, Burundi, South Africa, Turkey, and Venezuela owing to increasing instability and violence, the report says.

As reported in Supply Chain Management Review, political risks have also increased significantly in some advanced economies such as the United Kingdom and the United States.

“Growing income gaps and poor employment prospects for large segments of the world population have increased social tensions and raised the risk of political instability and turmoil,” Abolfathi says. 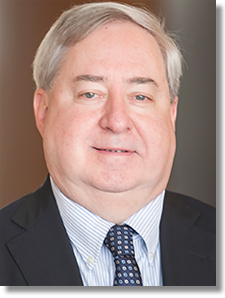 “Concerns about political developments – and even “radicalization” – in the United States and Europe are a greater source of uncertainty than usual”David J. Stockton,
a PIIE senior fellow

“It is also worth keeping in mind that dealing with the Great Recession and Eurozone crisis has greatly diminished the capacity of governments and civil societies for addressing social and political problems, which can lead to escalating sociopolitical tensions and government destabilization.”

The regional short-term risk index for six of the eight regions covered by the IHS Global Risk Service rose: Asia-Pacific, Middle East and North Africa, Sub-Saharan Africa, Central Europe and the Balkans, Commonwealth of Independent States and North America. The index fell for only two regions: Latin America and Caribbean and Western Europe.

In marked contrast to the policies of outgoing U.S. President Obama, the new Commander in Chief Donald Trump has been an outspoken opponent of new trade agreements undertaken without a good deal more oversight and consensus.

Concerns about political developments – and even “radicalization” – in the United States and Europe are a greater source of uncertainty than usual say economists at the Peterson Institute for International Economics (PIIE).

“Nonetheless, the world economy is projected to experience continued subdued growth in 2016–17,” says David J. Stockton, a PIIE senior fellow. “And a few significant emerging-market economies will start expanding modestly amid signs that recessions they have experienced in recent years may be ending.”

Among the advanced economies, the Brexit vote will put a serious dent in growth of the UK economy but not tip it into recession, according to Stockton. For the United States, the euro area, and Japan, Stockton forecasts continued modest expansion at a similar pace experienced in the past year or so.

In the United States, he predicts that the Federal Reserve will remain on its slow path of normalizing monetary policy. He argues that enough slack remains in labor markets to accommodate another couple of years of above-trend growth without pushing inflation above the Fed’s 2 percent objective. 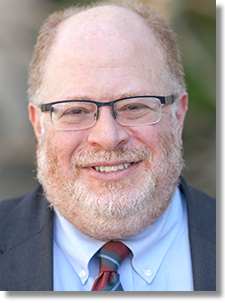 “Disagreements have shifted from currency valuations and trade and investment barriers to concerns about cyber theft and the threat that China’s economic slowdown poses to the world economy”Adam S. Posen, President, Peterson Institute for International Economics

“Disagreements have shifted from currency valuations and trade and investment barriers to concerns about cyber theft and the threat that China’s economic slowdown poses to the world economy,” he says.

Trade Questions
A wide range of free-trade agreements (FTAs) has facilitated trade with the U.S. in the recent past, and that trend is expected to gain momentum if the Trans-Pacific Partnership (TPP) is finally ratified, and if other deals – such as the Transatlantic Trade and Investment Partnership (TTIP) – come to fruition.

However, researchers for the Economist Intelligence Unit (EIU) note in a recent report that supply chain managers face a raft of additional complications that will require them to come up with new and innovative solutions.

According to EIU analysts, most multinationals are optimistic about future trade activity with the U.S. Indeed, the U.S. accounts for 13% of global imports and 9% of global exports and will continue to remain a key market for companies in Europe and Asia.

In fact, two-thirds of respondents in the EIU survey anticipate that their company’s trade with the U.S. will increase over the next five years, with over 43% expecting an increase of 10% or more. This means that supply chain managers will have yet more pressure to perform in the future, add analysts.

“Companies face a number of issues in trading with the U.S, but none of these are perceived to be insurmountable,” says Andrew Siciliano, practice leader for trade and customs at advisory firm KPMG, U.S. “Exchange-rate volatility presents the largest issue for companies, with 41% of respondents citing this as a concern.”

Siciliano also observes that close to one-third of EIU survey respondents cite transport costs and delays, trade-related infrastructure, and making payments as their top challenges. Other concerns cited by close to 30% of respondents are access to trade finance, unfair competition, communication challenges and cultural hurdles. 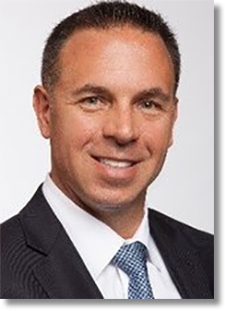 “Companies face a number of issues in trading with the U.S, but none of these are perceived to be insurmountable”Andrew Siciliano, practice leader trade and customs KPMG U.S.

“However, many of these are hurdles that companies experience in other markets as well,” adds Siciliano, “and the overarching consensus is that they are not viewed as deal-breakers when it comes to trading with the U.S., given the sheer size of the market opportunities there.”

Confidence Factor
The Stifel Logistics Confidence Index remained below the neutral mark at 49.4, but once more noted a slight improvement against the previous month.

In a sign that the bankruptcy of Hanjin Shipping has had little overall effect upon the container shipping industry, the November Sea Freight Confidence Index remained unchanged from October, at 49.0 points.

This tallies with industry expectations. Power abhors a vacuum, say maritime analysts at the Paris-based consultancy, Alphaliner. They recently reported that rival carriers have been quick to fill the gap in services Hanjin Shipping left behind; nine extra sailings were added in the late fall, according to the consultancy, with another six scheduled for the winter.

Nonetheless, even the biggest carriers are feeling the heat. In a recent interview, the Chairman of A.P. Møller – Mærsk maintains that the company “is done with ordering new steel,” in the face of the systemic overcapacity issue.

Regarding air freight, the most recent cargo statistics from the International Air Transport Association (IATA) show that volumes, as measured in freight tons, increased by 3.9% for the month of October.

It seems as though at least some are seeing positives in the current market, as continuing into November, the Air Freight Logistics Confidence Index saw a month on month gain of 0.6 points to 49.9, driven by a 1.6 point rise in the Present Index.

Analysts add though, that it is nonetheless prudent to view such growth with caution, as advanced by the head of IATA, who stated: “the underlying market conditions make it difficult to have long-term optimism.”